After overcoming a serious illness as a child, Jamie McDonald has become somewhat of reluctant Superhero. Now a world-record-holding adventurer, a bestselling author, motivational speaker and founder of the Superhero Foundation – he has won a Pride of Britain award for his fundraising achievements – which stretch into the millions of pounds.

In 2012, Jamie set out to break the Guinness World Record for marathon static cycling, and on December 20th stepped off the bike after a whopping 268 hours and 32 minutes.

Hi Jamie, thanks for taking the time for a chat with Le Col. Can I start by asking you to tell our readers who are you are, and what you do?

Sure, I’m Jamie McDonald, aka ‘Adventureman’. I am an author, an adventurer, and a motivational speaker. And I’m the co-founder of a UK charity called the Superhero Foundation.

You did something rather special back in 2012 – you broke a world record – tell us about that?

I sat on a stationary bike (like the spin bikes you get in a gym) for nearly 12 days non-stop, and I ended up breaking the Guinness World Record for the longest time for static cycling.

Crikey. And what was the previous record you were trying to break?

The previous record was set by an Italian guy, and it stood at 224 hours and 24 minutes.

So talk to me about why you took on that kind of challenge? Why would anyone want to sit on a bike for almost 12 days non-stop?!

So, if I take it back to about a year before the world record. I was a tennis teacher and I was saving up to put a deposit on a house. I was just about to buy the house, I mean, I had the papers in front of me and everything, but something just felt wrong. I had this gut feeling that it just wasn’t the right thing to be doing – so I put the pen down, pulled out of buying the house and decided to take a bit of time out.

I sat back and thought about what I wanted from life. I kind of reflected a little bit. And I started thinking about everything, and that included my life as a kid – when I was actually really sick, in and out of hospital all the time. 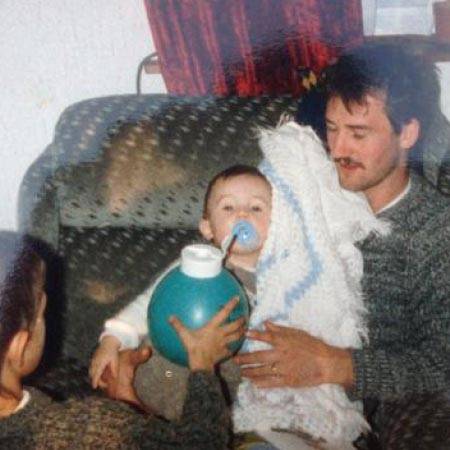 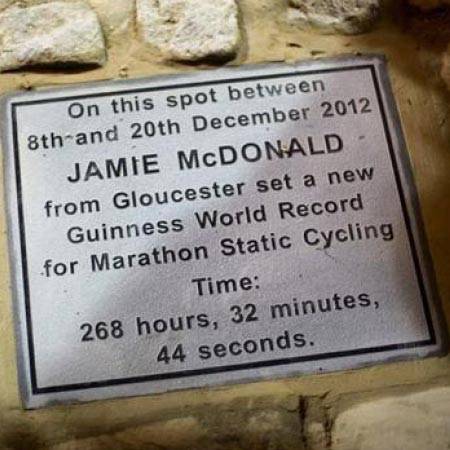 Why were you so sick??

I have a really rare spinal condition called Syringomyelia – try spelling that one! It’s a pooling of the spinal fluid, and means that as a kid I’d have epileptic fits, I had an immune-deficiency, and sometimes when it got really bad, I couldn’t move my legs at all. Luckily at about 9 years old, my mum dragged me out into the back garden to play tennis, she put up a piece of string across the garden to act as a net, and we started to play. Something happened from that point on. She got me moving, and the movement seemed to help with it all, with the illness, with everything. And gradually I started to get better.

I’m really lucky, most people with the disease end up immobile or in a wheelchair, but I didn’t - I managed to regain my health. Obviously then I had this vision that I’d be the next Roger Federer, or Tim Henman as it was then… but then I realized I was really (really) crap at tennis.

So back to the moment with the house… after pulling out on that I started reflecting on all the nurses and doctors that had helped me as kid. So I went to visit the children’s hospital, and it got me thinking. That I should, or I could, be doing something to give back to the world, and to all those people that helped me as a kid.

I’d heard about this guy, Joe, who was cycling around the world, and I actually ended up meeting him. I thought it was pretty awesome what he was doing, but when I chatted to him I realized that he was genuinely just normal bloke. And so I thought if a normal bloke could do that kind of thing, then maybe I could do it too. 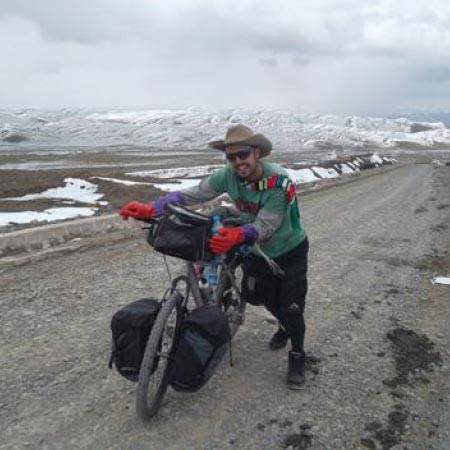 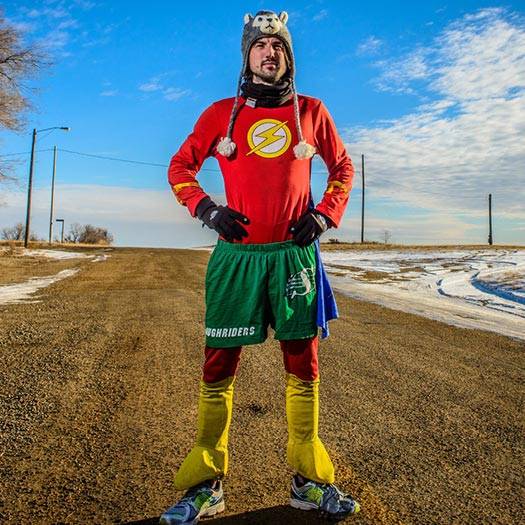 So what did you do then?

Love it! That’s quite a change of heart. Why Bangkok??

I went there on a holiday with some friends when I was 16. They make a great curry in Thailand. I liked it, so I thought I’d go back.

Around about a year, I mean, I was on a 50 quid bike and in my flip flops, and I had no idea what I was doing. I rode through Thailand, Cambodia, Vietnam, Laos, China, Kazakhstan, Kyrgyzstan, Tajikistan, Uzebekistan, Turkmenistan, Iran, Iraq, Turkey, and then through Europe to home in Gloucester.

So when did the idea to try an break the static cycling World record come in??

When I was going through Iran. I was spending so much time on the bike that I started wondering what the longest time anyone had ever spent on a bike was. So I googled it, and it came up with this Italian guy – he’d sat on the bike for 224 hours and 24 minutes – around 10 days. And at first I thought ‘that’s impossible!’. But then I thought, well hang on, if he’s done it, then surely I could do it. So I emailed Guinness to register the record, they accepted it, and that was it booked in. I was going to do it when I arrived back in Gloucester that December.

I got straight off the bike after 14,000 miles and thought ‘there is no better time to attempt this world record!’ Literally a few days after getting home, I jumped on the static bike to start.

Where did the challenge take place – were you just cycling staring at a wall??!

No we did it at Gloucester Docks – a beautiful spot! We had a massive marquee tent, which overlooked the water. It was pretty small, but it had a little corner in there for my bed.

So how did the challenge work? Are you allowed to sleep at all? To pee? To poop?

The Guinness rules state that for every hour that you’re on the bike, you accumulate a five minute break. We knew that the last record holder was cycling for 4 hours and then taking a 20 minute break, and trying to get a nap in that,. But I had someone from my team advise that if I was going to smash the record, I should cycle for 24 hours, and then build up to a 2 hour break, so that I could fit a full 1 and half hour sleep cycle in that rest period. So that’s what I went for!

And what kind speed did you have to cycle at?

The rules are that you have to stay above 12mph at all times on the bike, if you drop below it once – the record’s over. 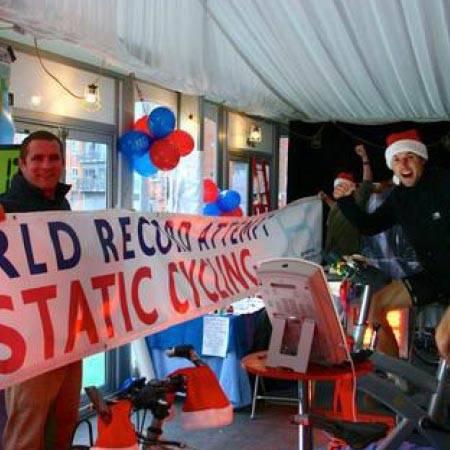 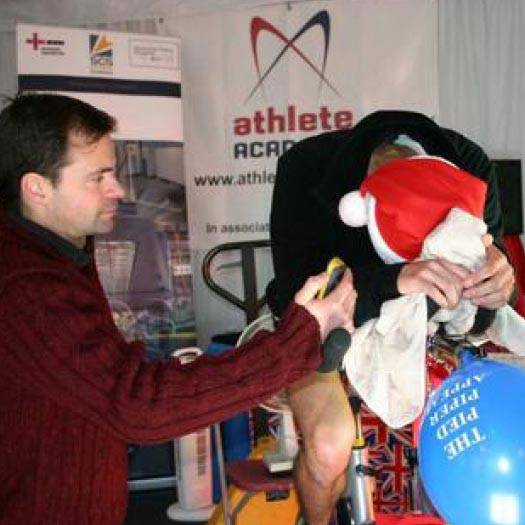 So how did it feel, starting off on what would be almost 12 days of cycling non-stop??

There was a massive countdown, loads of adrenaline. I’d spent the last few days wondering what I was doing. You know, I’m not an athlete or anything. But in that moment on the start, there was just so much adrenaline. I was just like: “COME ON!!!”

Tell me about a point in those 12 days when you thought about giving up?

I think it was around day 7, when this weird thing started happening. It turned to night outside, and I turned to a volunteer and said: “What’s going on? Why are in we in a different room?!” And they said: “No, no, Jamie – we’re in the same room.” And I kept insisting that they’d taken me into a different room.

From that point on, every time it turned from dark to light outside, my brain told me that I was in a different room. I think it was a coping mechanism that went on, I didn’t want my brain to do that, but it just did it.

The time when I really thought about giving up, was on day 8. When my bum started to bleed, blister and become infected. There were proper man-tears and everything. Because it was infected, everyone started to panic – so they got some NHS skin specialists to come and check it out. Check out my bum, that is. And everyone was worried that it might end the challenge, the state it was in back there.

So the nurses came in and took a photo of my bum, and then they showed me it! And I was like ‘why would you show me that?!’ It looked horrendous. At first they told me there was nothing they could do, and they advised me to get off the bike. They left, but I couldn’t stop – so I just carried on pedaling in total agony.

Then one of the volunteers suggested that Manuka honey was really good for healing things, so we ended up slapping Manuka honey on my bum, while I was cycling , and that started making it heal. It was magic, it got rid of the infection, and I kept on pedaling!

So you managed to break the World Record – how did that feel??

Ah it felt phenomenal!! Literally the whole of Gloucester turned out to see me, it was incredible. My family, my friends, everyone. They did a big countdown, and my dad had arranged for fireworks to be set off over the docks. And I remember saying in that moment ‘I think as humans, it’s possible you know - we can do anything!’ And I truly felt that. I really connected with it. And that stays with me until now.

So you broke the record, but is it right that you carried on cycling?

Yeah! I’d passed the 224 hour record, but I just carried on for another 44 more hours. I did think about getting off straight away, but I don’t know, I just thought – I’m fuelled with adrenaline now, I should just keep smashing it!

And then eventually one of my friends, the sensible one, came over to me and said – “Jamie you are at place now where no man has been, and I think we should worry about your health, we don’t know what this is doing to you.” And he was right. If someone called my name, there would be a 6 second delay before I responded to look at them. My brain was in a right state.

So, sensibly it was decided I should get off the bike. And also, it was now a few days before Christmas, and all the volunteers and supporters needed to go and do their Christmas shopping! So I got off after 268 hours and 32 minutes.

Wow. That is impressive! Okay, last question. Do you think anyone can do what you did, break records, push themselves to the edge?

I think most people wouldn’t put themselves through something like that – the marathon cycle I mean, it’s a bit nuts. But I do think that if someone has an inkling to jump in at the deep end and have a crack, I think, in fact I know – that they’d really surprise themselves. We can go so much further than we think, all it needs is the decision to do it.

You can read more about Jamie and his story at adventureman.org.

Jamie’s book: Adventureman: Anyone Can be a Superhero
is available on Amazon.